A couple of photos taken 21 Feb on Gurley St. in Prescott, AZ. These were taken across the street from the Washington Traditional School. What caught my eye was the frozen trees. 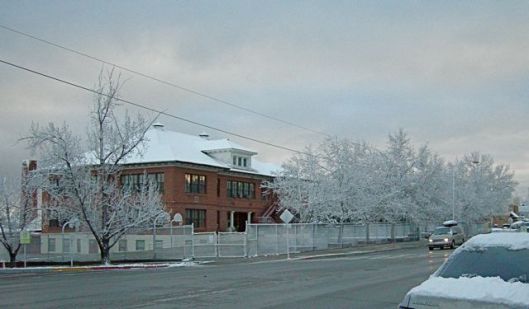 And here is a close up of the trees.

We’ve had quite a bit of rain and snow here this winter. As I recall, the forecast was for a dry, warm winter. Not only was it wet, it was cold too. So the forecast was wrong – it’s OK to make a mistake, I have been known to make one every now and again. I find it interesting that our mainstream media weather people add “but we are still in a draught” after they report precipitation. It had been a reflexive utterance just like a waiter in a Mexican restaurant saying “these plates are hot“. I have not heard the draught one recently. As for the hot plates, yes, that is a physical reality.

Perhaps the multiyear draught is ending, perhaps not. If it is, then we are at an inflection point where a major trend is changing. These inflection or change points are very hard to identify when they are happening. In hindsight, they are obvious.  I believe that our society is at several inflection points now. Who would have thought that that a black man with Muslim name would be a serious contender for president of the US? Who knew that major banks had made so many bad loans?