Lacy passed away on Saturday December 12, 2015 of cancer in her chest. Lacy had a lung disease, the dog version of COPD, that we were successfully treating with medication. She also had some arthritis in her shoulder for several years. Her vet had several years of chest x-rays on file, so she was able to compare Lacy’s current x-ray with this history. We could see her lung disease getting worse, and also the presence of a mass in her chest which was not in the earlier x-rays that the vet thought was cancer. Lacy had one bad week when we tried various medications to make her breathing easier and keep her comfortable. On her last night, she was up most of the night gasping for air and she was not able to walk more than a few steps. Gary and I decided it was time to end her pain and suffering.

Lacy joined our pack in March 2009, when her person became ill and could no longer care for her. Lacy was the pack leader for most this time, she dominated the other dogs except for our lab Annie who ignored the small dog power struggles. When Annie passed Lacy was the undisputed ruler.

Lacy was deeply bonded to Gary, she was really his dog. Gary was Lacy’s work, she’s follow him around the house. When he worked on his computer, she’d lay in a dog bed under his desk. Lacy was a the main guard dog, in the living room she’d stay in a spot near the door to guard it, at night she slept at the foot of our bed with her head towards the large window. Over the years when Lacy was on guard, no cat or squirrel ever got into the house. No dog ever broke in to steal the food supply. No javelina ever got past the fence. Lacy was successful at her job. On her last day I promised her that I would take care of Gary though I wasn’t going to follow him around the house.

The other dogs’ reaction to Lacy’s absence has been varied. They know she is not here. Betty, the newest member of the pack (about 3 years) does not seem affected at all. Suzie is deeply affected, she has been needy and demanding attention from both Gary and I. She paws at my leg asking to be petted, and she presses tightly against either of us. This morning she sat on my lap while I did some bills and other work on my computer, this is very unusual behavior for Suzie. Stacy has been looking for Lacy in spots where Lacy used to hang out. She is staying very close to me, right now she is laying under my desk. So these two recognize that Lacy is not here, that something important has changed. Do they understand death? I don’t know.

Lacy was loved by Gary and I, she will be missed for a long time.

We had a bit of snow overnight. Not much, maybe 2 inches. 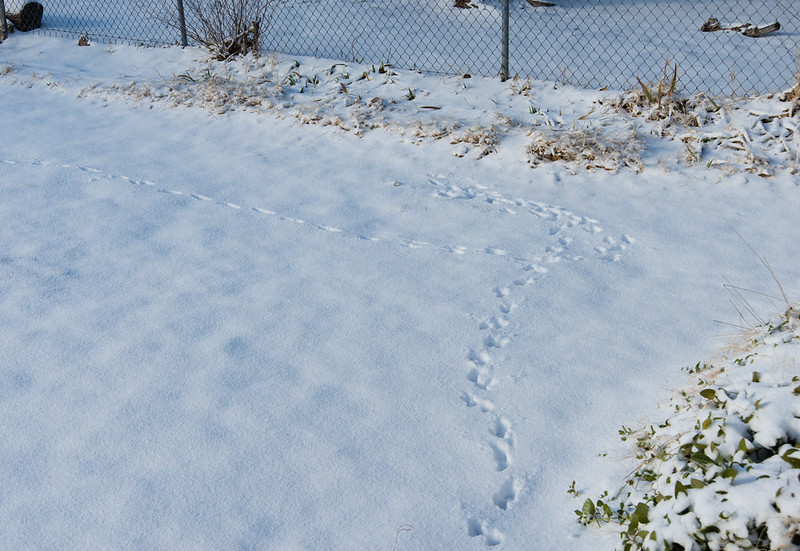 Some dog footprints in the snow. 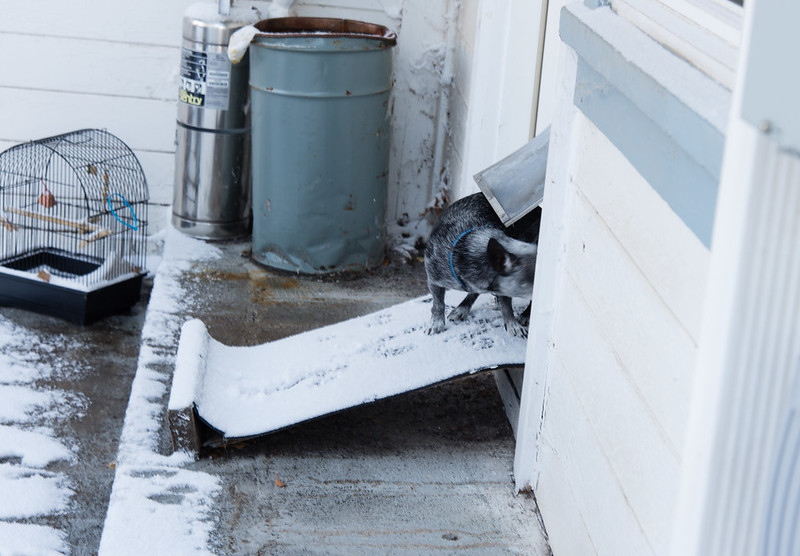 Chihuahua Betty hates the snow. She went out the doggie door, saw snow, did a u-turn back into the warm house.
I cleared a spot in the yard and carried that spoiled thing out to it, where she relived herself. Otherwise she would have done it in the house.