Have you heard about #birdboxchallenge where folks try to go around blindfolded like characters in the Netflix move “Bird Box”? We watched the movie, it’s OK in the zombie apocalypse pattern.
Gary bought these fabric devices to keep ice and snow off the car windshields. We put them on yesterday to try them out. They look like they would be good for #birdboxchallenge idiocy. 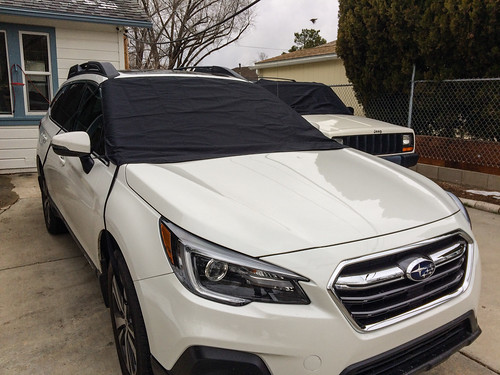 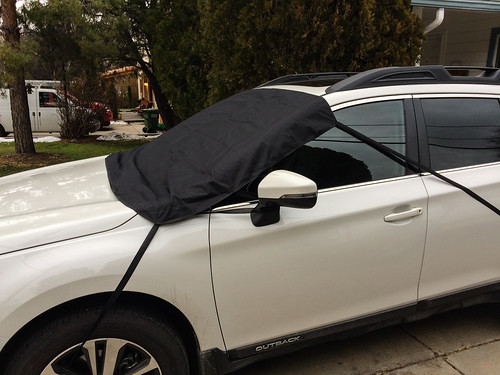 I did not make this up, I swear!!
Never mind the Russian GRU operatives that supposedly hacked the 2016 US elections. According to the linked article, the real power was right wing chaos magicians on an anonymous chat board called 4chan /pol/ appealing to an ancient Egyptian frog god called kek.

“September 11, 2016 duly came, and on that day three things happened. First, Clinton publicly denounced Pepe the Frog as a right-wing hate symbol, to the great delight of the chans—all that free publicity for their mascot! Then, as she left a memorial service for the World Trade Center attacks, in view of the cameras, she swayed, toppled, and had to be hauled into her waiting SUV like a sack of potatoes. The GOP rumor mill went wild, and the chaos magicians of /pol/ did the digital equivalent of looking at each other in shock. There’s a useful acronym in occult circles, TSW—the polite version of its meaning is “this stuff works”—and everyone who’s ever taught magic to novices is used to the inevitable TSW panic, the vertiginous moment at which the student finally grasps that there’s more to magic than make-believe, and usually has to be talked down from a state close to hysteria. The chans went through their own TSW moment that day.”

US wildlife experts are baffled by a “wolf-like” animal that was killed by a Montana farmer.

The rancher near the town of Denton shot the creature last week when it came within several hundred metres of his livestock, said officials.

State wildlife experts said they have been unable to pinpoint its species.

Bizarre theories have circulated online that it could be a werewolf, a young grizzly bear or a relative of Bigfoot.

“We have no idea what this was until we get a DNA report back,” a spokesman for the agency, Bruce Auchly, told the Great Falls Tribune.

I’ll go with some kind of extraterrestrial doggie.

In Japan, at the Fukushima Daiichi failed nuclear reactor, robots sent into reactor #2 to get images and other data are failing. There’s too much radiation, and radiation kills electronics. The robots were designed to handle 73 sieverts, but one encountered 530. What’s a sievert? One sievert, the unit measurement for a dose of radiation, will cause illness if absorbed all at once, and 8 sieverts will result in death, even with treatment.

Now, Tepco has admitted that repeated robot failure is hampering its plan to search the bottom of the reactor, and find the estimated 600 tons of fuel and debris that may have poured out of the reactor and into the concrete lining below it. Initial attempts to see into Reactor #2 via robotic probe have all failed. We’ve only been able to estimate contamination levels by checking the amount of interference in the video feed the robot relays. The new hardened robot built by Toshiba and meant to give Tepco a much-improved ability to survey the damage reactor died 5x faster than expected and stalled 10 feet from the grate it needed to inspect.

I read someplace, where I don’t recall, that Fukushima Daiichi is the world’s biggest dirty bomb. Sounds true.

I could not resist posting this 🙂

MERIDIAN, Idaho (AP) — A pet squirrel named Joey prevented a burglary attempt in Idaho last week by scratching the teen suspect when he tried to break into a gun safe, police said.

The unidentified teenager told officers that the squirrel’s attack “scared him, obviously, because he wasn’t expecting to have, you know, a squirrel come flying out of nowhere at him,” said Officer Ashley Turner of the police department in Meridian, a Boise suburb. “So basically he said he took what he could and left as fast as he could.”

The squirrel’s owner, Adam Pearl, said Joey has lived in his house for about six months after he was found in a flower garden by a friend’s daughter when he was about a week old.

He said Joey’s eyes were still closed, and they set an alarm to feed him every two hours