What do you do with your handgun when you need to use the restroom?

I was at Gunsite in Pauldin, Az recently and saw this clever device to hold a handgun while using the restroom. It’s a board with two dowels protruding, one for a .45 caliber barrel and one for a 9mm (0.355 inches) barrel.
When using the restroom, place your handgun on the holder. When finished, retrieve and reholster.
That’s my first generation Glock 19 demonstrating how to use this device BTW 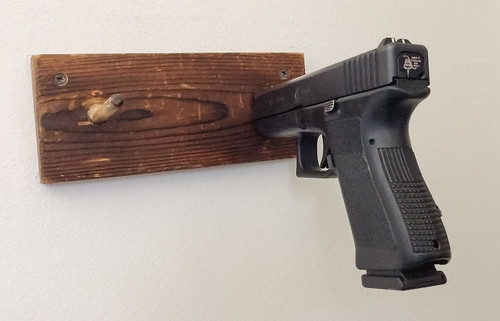 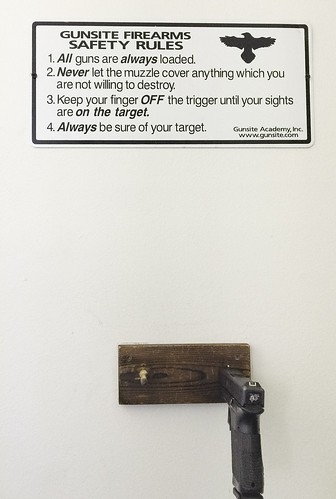 Masked Person With A Gun, originally uploaded by dagnyg.

Is this a person in the hoodie a gang member? A terrorist? A robber? No! It happens to be a member of the Prescott Action Shooters club at the June 2010 IDPA match. The day was cold and windy.

Once again the well known idea that More Guns = Less Crime is proven yet again. This time in the murder capital of the U.S., Washington D.C. (district of corruption?). One year ago the Supreme Court struck down the unconstitutional ban on handguns in D.C. The result? Even more carnage and mayhem in the streets? Chaos? No! Homicides fall to a 45 year low!! From the Washington Post. BTW this left wing paper forgets to mention the removal of  the handgun ban as a possible cause. Typical liberal crap, no?

The District and Prince George’s County, long considered the region’s most violent jurisdictions, logged their lowest homicide totals in years in 2009, with D.C. hitting a 45-year -low.

The number of slayings last year in the District, once known as the murder capital of the United States, was 140, a 25 percent drop from 2008. Prince George’s recorded 100 killings, the county’s lowest in nine years. Montgomery and Fairfax counties also had significant decreases in homicides in 2009.

But the drop in the District was unprecedented and significant for its size and its scope: Every police district in the city experienced at least a double-digit drop in homicides.