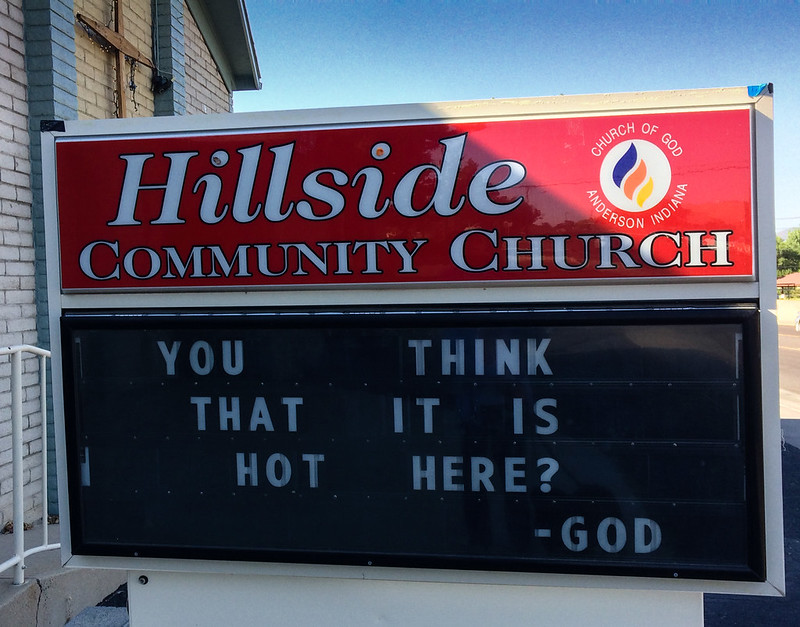 Seen in front of the Hillside Church on Ruth St in Prescott, Az

I gave myself a challenge: come up with something good about the current heat wave impacting Arizona. This took me a while, but it was just outside. My solar powered clothes dryer is very fast in this hot and dry weather.

Phoenix Az is expecting extreme heat, even for Phoenix. The first day of summer is Wednesday 6/21, and it starting out ugly.

After a cool start to the week, record heat is moving in.

We are talking extreme heat where temperatures will reach dangerous levels. The National Weather Service issued an Excessive Heat Watch Friday through Tuesday.

The hottest day will be 118 on Monday, and that is just 4 degrees shy of the all-time record of 122.

A lot of Valley residents will never forget that day on June 26, 1990. It was so hot that Sky Harbor decided to close the airport because they were worried that it would be difficult for planes to get enough lift to take off.

There were even t-shirts made, telling people that they survived the hottest day in history.

There is also a Facebook page where folks tell stories about what they did that day.

Experts say we probably won’t ever hit 122 ever again because the official temperature gauge the National Weather Service uses has moved. It used to be located in the middle of a parking lot, on the black top surface where the temperature would be warmer.

I had the misfortune to live in Phoenix when it 122 degrees. And yes, it was noticeably worse that the usual summer inferno.

In Prescott, it’s about 20 degrees less hot (notice I did not say cooler, this is relative) than Phoenix. Thanks to our 5300 feet of elevation. Still, the forecast is 101 on Tuesday.

The humidity is still low. 6% right now. Our evaporative cooler is doing a very good job keeping the house cool. It is a much less costly way to cool, and it’s viable as long as the humidity remains low.